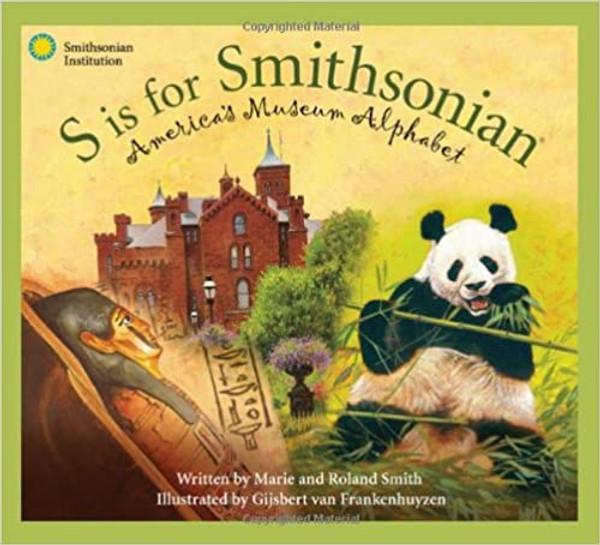 Where can one find the world's largest mounted African elephant? Or the world's largest blue diamond? Why, at the world's largest museum complex and research organization, of course! In S is for Smithsonian® readers can take an armchair tour of the incredible exhibitions and collections found in the Smithsonian Museum. When it opened in 1855, no one could have imagined that the Smithsonian Museum would grow to include 19 museums, nine research centers, or over 130 million objects, artworks, and specimens collected from all over the world. With over 25 million visitors a year, the Smithsonian truly is the world's largest museum! See the airplane Amelia Earhart flew on her solo Atlantic flight. Admire diamond earrings that once belonged to Marie Antoinette. From A-Z, S is for Smithsonian® explores the amazing objects and memorable displays that are part of this remarkable museum. Marie and Roland Smith have collaborated on several alphabet titles, including B is for Beaver: An Oregon Alphabet and Z is for Zookeeper: A Zoo Alphabet. They live on a small farm south of Portland. The author of many books for children, Roland has also penned Sleeping Bear Press's middle-grade series, I, Q. Gijsbert van Frankenhuyzen has illustrated more than 20 books with Sleeping Bear Press, including the bestselling The Legend of Sleeping Bear; The Edmund Fitzgerald: Song of the Bell; and most recently, Itsy Bitsy & Teeny Weeny. He and his wife, Robbyn, live in Bath, Michigan, on their 40-acre farm and wildlife refuge.