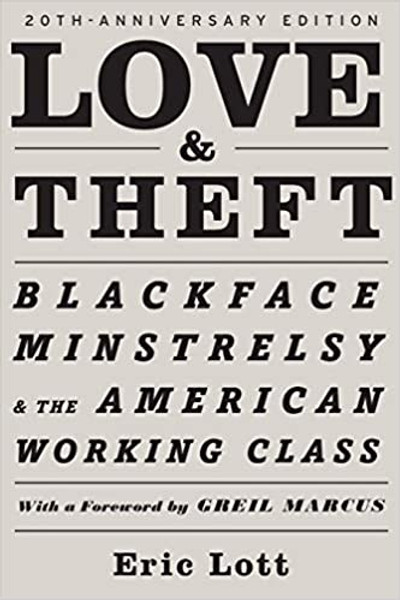 For over two centuries, America has celebrated the same African-American culture it attempts to control and repress, and nowhere is this phenomenon more apparent than in the strange practice of blackface performance. Born of extreme racial and class conflicts, the blackface minstrel showappropriated black dialect, music, and dance; at once applauded and lampooned black culture; and, ironically, contributed to a "blackening of America."Drawing on recent research in cultural studies and social history, Eric Lott examines the role of the blackface minstrel show in the political struggles of the years leading up to the Civil War. Reading minstrel music, lyrics, jokes, burlesque skits, and illustrations in tandem with working-classracial ideologies and the sex/gender system, Love and Theft argues that blackface minstrelsy both embodied and disrupted the racial tendencies of its largely white, male, working-class audiences. Underwritten by envy as well as repulsion, sympathetic identification as well as fear--a dialectic of"love and theft"--the minstrel show continually transgressed the color line even as it enabled the formation of a self-consciously white working class. Lott exposes minstrelsy as a signifier for multiple breaches: the rift between high and low cultures, the commodification of the dispossessed by theempowered, the attraction mixed with guilt of whites caught in the act of cultural thievery.This new edition celebrates the twentieth anniversary of this landmark volume. It features a new foreword by renowned critic Greil Marcus that discusses the book's influence on American cultural studies as well as its relationship to Bob Dylan's 2001 album of the same name, "Love & Theft." Inaddition, Lott has written a new afterword that extends the study's range to the twenty-first century

Crayons Trick or Treat, The

City of Dusk, The

How I Met My Monster (Goosebumps Most Wanted #3)